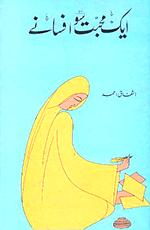 Released: March 1999. Written by Ashfaq Ahmed. These plays were aired in the 70’s but now they have come back to life thanks to Combine Productions. The stories are the same but the actors, directors, and the rest of the crew are all new. It’s turning out to be the season’s most watched tv program due in partly to Mr. Amjad’s great writing style. Plus the poetry is absolutely amazing even if the play is not.
So far the plays that have been aired include:
Quratul-Ain – starring Arjumand Rahim and Hasan Raza. Directed by Najam uz Zaman. Story of an airforce pilot who has to come to terms with not fulfilling his dream.
Ishtabah-e-Nazar – Starring Nadia Jamil and Asif Seemab. The acting wasn’t very well but the story was good and thus made the play watchable.

Sanam Gazeeda – Starring Sania Saeed. Directed by Mahreen Jabbar. Great play and of course a brilliant performance by Sania.
Himmat-e-Batil – Starring Nausheen Qureshi and Rehan Sheikh. A story of love and loyalty beautifully portrayed by the actors and wonderfully directed. Shows how a person should love what is on the inside not what appears on the outside.
Sanam Goth Jo Driver – Starring Mishi Khan, Yasir Nawaz, and Ayesha O’Connell. Story of a rich girl falling in love with a poor taxi driver. Not too impressive overall.
Mah-e-Kanan – Starring Hasan Raza, Shagufta Ijaz, and Maya Khan. Story of a woman who has had many heartbreaks in life, but as soon as she tries to relive her life, life itself doesn’t give her chance to do so. Wonderful performance by Shagufta.
A must watch if you’re looking for good stories and good acting which are becoming harder and harder to find in Pakistani dramas.