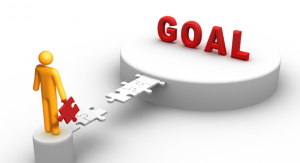 The car is packed and you’re ready to go, your first ever cross-country trip. From the

White Mountains of New Hampshire to the rolling hills of San Francisco, you’re going to see it all.

You put the car in gear and off you go. First stop, the Baseball Hall of Fame in

Cooperstown, New York. A little while into the trip you need to check the map because you’ve reached an intersection you’re not familiar with. You panic for a moment because you realize you’ve forgotten your map. But you say the heck with it because you know where you’re going. You take a right, change the radio station and keep on going. Unfortunately, you never reach your destination.

Too many of us treat goal setting the same way. We dream about where we want to go, but we don’t have a map to get there.

What is a map? In essence, the written word

What is the difference between a dream and a goal? Once again, the written word

But we need to do more than simply scribble down some ideas on a piece of paper.

Our goals need to be complete and focused, much like a road map, and that is the purpose behind the rest of this article.

If you follow the 7 steps I’ve outlined below you will be well on your way to becoming an expert in building the road maps to your goals.

Life consists in what a man is thinking of all day.

1. Make sure the goal you are working for is something you really want, not just something that sounds good.

I remember when I started taking baseball umpiring more seriously. I began to set my sites on the NCAA Division 1 level. Why? I knew there was no way I could get onto the road to the major leagues, so the next best thing was the highest college level. Pretty cool, right. Wrong.

Sure, when I was talking to people about my umpiring goals it sounded pretty good, and many people were quite impressed. Fortunately I began to see through my own charade.

I have been involved in youth sports for a long time. I’ve coached, I’ve been the

President of leagues, I’ve been a treasurer and I’m currently an Assistant State Commissioner for Cal Ripken Baseball. Youth sports are where I belong; it is where my heart belongs, not on some college diamond where the only thing at stake is a high draft spot.

When setting goals it is very important to remember that your goals must be consistent with your values.

2. A goal cannot contradict any of your other goals.

For example, you can’t buy a $750,000 house if your income goal is only $50,000 per year. This is called non-integrated thinking and will sabotage all of the hard work you put into your goals. Non-integrated thinking can also hamper your everyday thoughts as well. We should continually strive to eliminate contradictory ideas from our thinking.

3. Develop goals in the 6 areas of life:

4. Write your goal in the positive instead of the negative.

Work for what you want, not for what you want to leave behind. Part of the reason why we write down and examine our goals is to create a set of instructions for our subconscious mind to carry out. Your subconscious mind is a very efficient tool, it cannot determine right from wrong and it does not judge. It’s only function is to carry out its instructions. The more positive instructions you give it, the more positive results you will get.

Thinking positively in everyday life will also help in your growth as a human being.

Don’t limit it to goal setting. 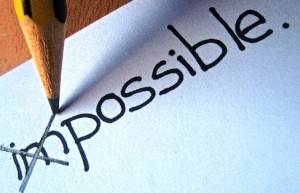 5. Write your goal out in complete detail.

Instead of writing “A new home,” write “A 4,000 square foot contemporary with 4 bedrooms and 3 baths and a view of the mountain on 20 acres of land.

Can you close your eyes and visualize the home I described above? Walk around the house. Stand on the porch off the master bedroom and see the fog lifting off the mountain. Look down at the garden full of tomatoes, green beans and cucumbers. And off to the right is the other garden full of a mums, carnations and roses. Can you see it? So can your subconscious mind.

6. By all means, make sure your goal is high enough.

Shoot for the moon; if you miss you’ll still be in the stars. Earlier I talked about my umpiring goals and how making it to the top level of college umpiring did not mix with my values. Some of you might be saying that I’m not setting my goals high enough. Not so. I still have very high goals for my umpiring career at the youth level.

My ultimate goal is to be chosen to umpire a Babe Ruth World Series and to do so as a crew chief. If I never make it, everything I do to reach that goal will make me a better umpire and a better person. If I make it, but don’t go as a crew chief, then I am still among the top youth umpires in the nation. Shoot for the moon! 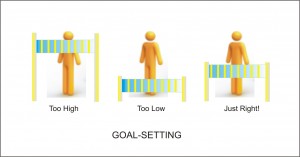 7. This is the most important, write down your goals.

Writing down your goals creates the road-map to your success. Although just the act of writing them down can set the process in motion, it is also extremely important to review your goals frequently. Remember, the more focused you are on your goals the more likely you are to accomplish them.

Sometimes we realize we have to revise a goal as circumstances and other goals change, much like I did with my umpiring. If you need to change a goal do not consider it a failure, consider it a victory as you had the insight to realize something was different.

LIFE ALWAYS COME IN A PACKAGE

Saifullah Khalid is a Life Coach, Consultant, Motivational speaker, trainer and a writer, who will lead You to achieve Success END_OF_DOCUMENT_TOKEN_TO_BE_REPLACED

The book The Lost Symbol – an international phenomenon that has captured the imagination of millions of readers – appears to rest on a preposterous premise: that thoughts can affect physical reality.

Brown’s central character, ‘noetic’ scientist Katherine Solomon is particularly interested in the power of many minds thinking the same thought at the same time, claiming that this magnifies the effect. As proof, she cites the experimental work of a real web-based laboratory, and its architect.

Such architects create a web-based global laboratory by enlisting scientists in prestigious academic centers such as the University of Arizona, Pennsylvania State University, University of California at Davis, Princeton University, and other prestigious universities in Europe. Every few months, such web-based laboratories recruit thousands of readers from 90 countries around the world to send thoughts to targets created in one of the scientist’s rigorous laboratory settings.

To date, many web-based experiments have shown positive results -demonstrating that intention can alter the essential properties of water and living things, and even be used to lower violence in a war-torn area. Participants of these web-base experiments are invited from around the globe to send intention to one of the chosen set of seeds, in all of the six experiments the seeds sent intention grew significantly faster and higher than – and sometimes twice as high as – three sets of controls.

Gary E. Schwartz, Ph.D., professor at the University of Arizona, reported the results of these six Germination Experiments in a scientific paper presented at a Society for Scientific Exploration conference in June 2008. Distance doesn’t seem to have any bearing on the outcome. In one experiment, participants in Sydney, Australia successfully sent intention to seeds sitting at the University of Arizona’s labs in Tucson.

Such web-based laboratories have also embarked on a series of experiments with Russian physicists and scientists at Pennsylvania State University and the University of Arizona to investigate whether intention can improve the quality of water. Thus far, they’ve run five experiments demonstrating that intention can change certain essential qualities of water.

Most recently the University of Arizona ran two rigorous studies showing that thoughts can change the energy footprint of tap water to something similar to that of mineral water. In earlier studies with Russian physicist Konstantin Korotkov, measurements taken with sophisticated equipment showed that even a simple positive frame of mind among the participants sending intention to the water changed its essential properties.

In September 2009, a large-scale experiment was emabarked to study whether mass thought can lower violence in war-torn Sri Lanka. At the time, Sri Lanka’s Tamil Tigers, one of the world’s most well-trained terrorist organizations, with the highest number of suicide bombers, were firmly in control of the conflict, after capturing and cutting off the north of the country.

After the week-long focus of the intention groups, a team of scientists, including Jessica Utts, professor of statistics at University of California at Davis, tracked that the violence increased dramatically and then suddenly plummeted. After analyzing two years’ worth of weekly violence data, the scientific team concluded that the week of intention appeared somehow ‘pivotal’ in the course of the war.

Almost immediately after this large-scale experiment, the Sri Lankan government gained control, and within a few months drove the rebel forces out of the north. A few months after that, the 25-year war was over. It was noted that more experiments will have to be done to demonstrate the power of thought to lower violence.

Nevertheless, to critics of this work, responses have been that studies of the power of thought are simply the stuff of true scientific investigation. ‘Frontier science is the art of inquiring about the impossible. All of our major achievements in history have resulted from asking an outrageous question. What if giant metal objects could overcome gravity? What if there is no end of the earth to sail off?

‘All of the discoveries about the power of thought proceed from a seemingly outlandish question: what if our thoughts could affect the things around us? But the most important part of scientific investigation is just the simple willingness to ask the question.’